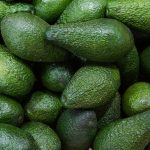 • Your avocado toast is definitely getting more expensive. The price of a twenty-pound carton of avocados from Michoacán, Mexico (the central hub of Mexican avocado production), has risen from $20 in January to $50 today—a staggering, 150-percent jump in just five months. Unfavorable weather, labor shortages, and increasing fertilizer prices have all contributed to the spike.

• Reflective of the continued plunge in consumer confidence, (1) the US personal savings rate fell to 4.4 percent, its lowest since 2008, and (2) US consumer credit increased by 7.5 percent year over year, its largest increase since 2011.

• If the monthly payment for a thirty-year mortgage at a 3 percent interest rate allows a homeowner to buy a $450,000 house, that same payment will only support a house worth $316,440 when interest rates rise to 6 percent.

• Gas prices continue to increase; one average hour of work in the US now buys just 6.8 gallons of gas, the least since 2014.

• Investors are using the term “crypto winter” to describe the steep plunge in cryptocurrency value since the industry’s November peak. Millennials, it appears, are feeling the most pain (38 percent of them hold crypto).

• Keurig Dr. Pepper (KDP) – KDP was added to the S&P 500 index, a development which should lead to broader coverage and deeper understanding of the company’s impressive operations and potential.

• Apple (AAPL) – At its recent Worldwide Developer Conference, Apple unveiled a new—but long-desired—feature: the ability to edit and delete sent iMessages. The development solves a problem that has plagued other platforms, including Twitter, for years.

• Alphabet (GOOGL) – Alphabet disclosed that more than 1.5 billion people watch YouTube Shorts (YouTube’s platform for videos less than one minute in length) every month. This figure, which is comparable to TikTok’s monthly audience, eases fears that YouTube is losing market share to its rival.

• Enterprise Products Partners (EPD) – As a result of the company’s strong focus on its own energy transition, Enterprise Products Operating, a subsidiary of Enterprise, signed a letter of intent with Oxy Low Carbon Ventures, a subsidiary of Occidental, to develop CO2 transportation and sequestration solutions for the Texas Gulf Coast. Enterprise’s management has emphasized that the company’s expertise in pipelines and underground storage makes it uniquely qualified to work on carbon sequestration, a notion supported by this recent development.

Looking beyond the recent rate hikes

In June, the Federal Reserve (Fed) announced the largest rate hike since 1994 in response to inflation readings, which are the highest they’ve been in forty years. Although the Fed’s rate hikes garner much attention from the press, the hikes themselves have only a limited direct effect on the economy. It is the tightening of financial conditions, rather, that slows the economy and produces the intended effect of the Fed’s policy decisions. As Ben Bernanke famously explained, “When I was at the Federal Reserve, I occasionally observed that monetary policy is 98 percent talk and only two percent action. The ability to shape market expectations of future policy through public statements is one of the most powerful tools the Fed has.”

When the Fed decides to speak about—or enact—rate hikes, its aim is to reduce borrowing demand and slow the economy. Taken together, higher interest rates and wider credit spreads make it more costly to borrow, which should in turn reduce demand for money and restrain lending (money creation). Rising rates can also increase the value of US dollar, because higher rates attract foreign investment capital. As the US dollar rises relative to other currencies, US-produced goods and services become more expensive to foreigners, hampering exports and restraining growth. Rising rates can also lower equity prices by (1) decreasing the present value of future earnings and cash flows, (2) increasing the cost of capital for businesses, and (3) making it less desirable to invest in (risky) equities because of the higher rates (safe) bonds will return. Lower equity prices tend to stifle economic activity, because as consumers watch the value of their equity portfolios fall, they rein in spending.

The Fed has indicated that policy rates are headed higher and the market has responded accordingly; it is currently pricing in a terminal rate north of 3.8 percent. Financial conditions are tightening at the fastest pace since the global financial crisis in 2008 and have tightened beyond 2018 levels (when the Fed abandoned its last rate hike cycle). Rate hikes—especially anomalous 75-basis point hikes—will continue to garner attention, but it’s the tightening of financial conditions that really matters. 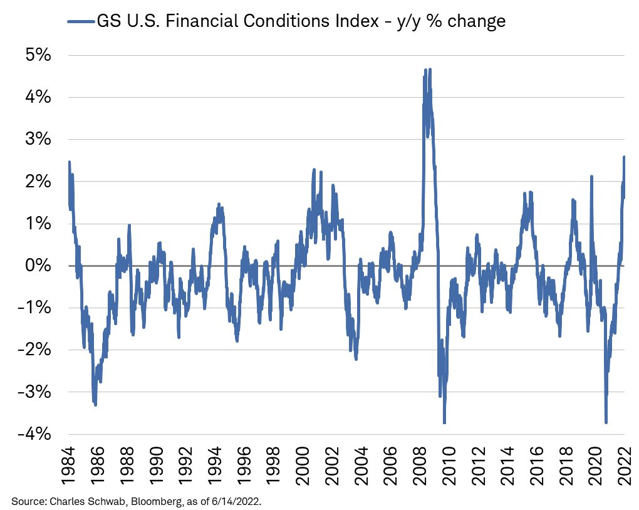