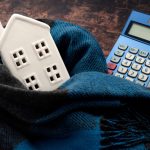 • It appears that the semiconductor shortage plaguing the auto industry may be easing. US Steel’s CEO noted the company’s auto customers are “beginning to add to the fourth-quarter and first-quarter build schedules,” and Toyota—with factories returning to normal for the first time in seven months—stated that in December, it expects to make up for production lost from supply shortages. Similarly, a GM spokesperson commented, “the week of November 1 represented the first time since February that none of our North American assembly plants were idled due to the chip shortage.”

• All US households should expect to pay more for heating this winter. Nearly half of US households use natural gas to heat their homes; these customers will pay 30 percent more, on average, than they did last winter. Of remaining households, those that heat with electricity (41 percent) can expect to pay 6 percent more, while the smaller populations of those that heat with propane (5 percent) and heating oil (4 percent) will pay 54 percent and 43 percent more, respectively, on average. A colder-than-average winter will trigger even higher price spikes. (Source: International Energy Agency)

• The holidays are fast approaching, yet the shipping industry continues to struggle; there are delays, container backups, and loitering ships at ports around the world. Exacerbating the problem is the industry’s highly consolidated nature; current conditions, which are unfavorable to consumers, are highly profitable for the few who dominate the industry. Just sixteen companies—eight freight liners, three factory groups, and five box lessors—control more than 80 percent of container-ship, box-production, and box-leasing capacity. (Source: FreightWaves)

• The Treasury’s 30-year bond auction on 11/10/21 has been labeled “catastrophic” due to the largest tail on record, the difference between the highest accepted yield and the yield seen ahead of the sale. While this auction could be unique, it may also be the first glimpse of a “taper tantrum,” with bond investors signaling to the Fed that they will not continue to purchase bonds at current price levels if quantitative easing is ending. Treasury auctions aren’t known to be sensational events, but if our interpretation is correct future auctions could become much more exciting.

• More cash-out refinances were conducted in the second quarter of 2021—1.1 million—than in any quarter since 2007. Most customers planned to use refinancing cash for home improvement projects (42 percent), but others planned to use it for investment opportunities (27 percent), to pay down debts (25 percent), for everyday purposes (21 percent), or for a large purchase (18 percent). (Source: Harris Poll)

• EPD – Enterprise Products Partners recently disclosed that the design for its propane dehydrogenation plant, currently under construction, has changed. The new design supports hydrogen as the plant’s sole fuel source, which reportedly reduces its carbon-equivalent emissions by nearly 90 percent. It appears that additional production facilities could potentially be retrofitted for hydrogen fuel as well.

• NVS – Novartis is selling its position in Roche, a stake it has held for about twenty years and that is worth approximately $20.8B; net proceeds from the sale will amount to nearly $14B. This move, along with reports of the company putting its Sandoz business up for review, could mean big changes for Novartis are ahead.

• PAR – Installations of Par Technology’s Brink™ Point of Sale reached record levels during the third quarter of 2021. Brink™ is now installed in nearly 15,000 restaurants across the US.

• CNI – Canadian National Railway recently purchased a hybrid locomotive from Wabtec. The new locomotive can reportedly reduce fuel consumption and emissions by up to 30 percent.

We’re often told inflation is bad for businesses, savers, and consumers. Given the current macroeconomic backdrop—inflation in October rose to 6.2 percent year-over-year (y/y) as measured by the Consumer Price Index (CPI), the highest level in forty years—it’s important to understand how inflation impacts the companies we own.

Suppose a company earns $100 in revenues and has a net income margin of 25 percent (i.e., for every $100 the company takes in, it earns $25 in profit and spends $75 on expenses). If prices economy-wide increase by 5 percent due to inflation, this company’s revenue would increase to $105, expenses would increase to $78.75, and profits would grow to $26.25 or 25 percent of sales—the profit margin didn’t change, and the real profit earned (discounted for inflation) remains $25. 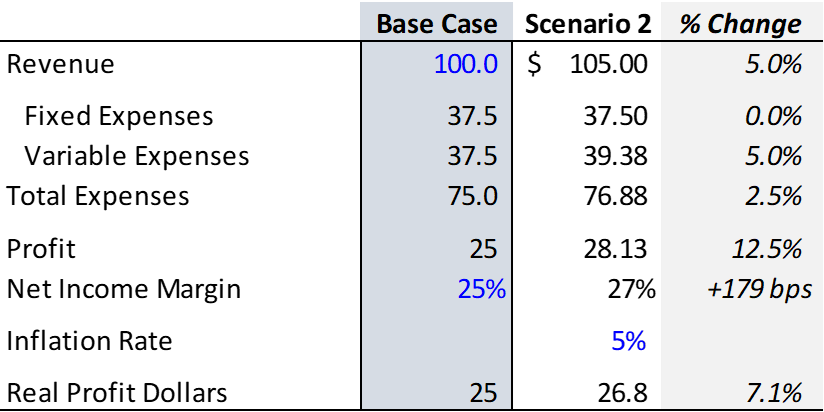 Taking this example one step further, what happens when cost inflation is different than the price inflation the company can charge customers? Clearly, if price inflation is greater profits rise, but if we assume variable costs increase faster what happens? Below we have revenues benefiting from 5 percent inflation and variable costs increasing 7 percent. This scenario would lead profits to increase nearly 10 percent nominally and over 4 percent in real terms. 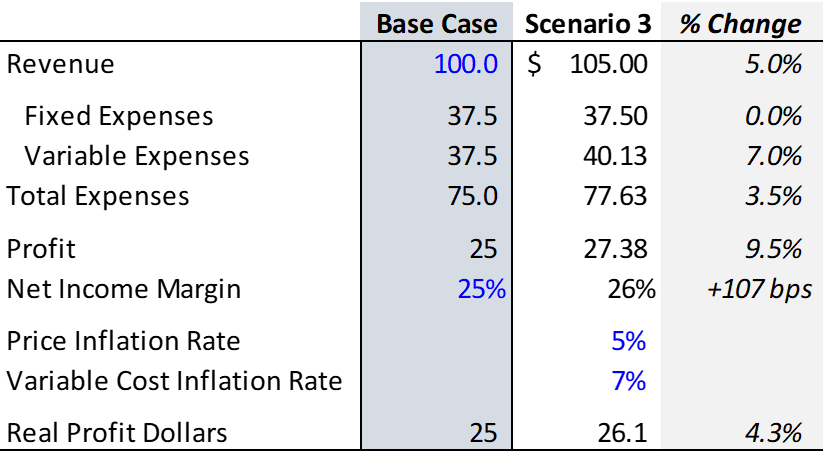 Clearly these examples are oversimplified, but they are telling. With a 50/50 split of fixed and variable costs, variable costs need to rise at double the rate the company can raise prices for its customers to cause margins and profits to decrease. (Of course, this all assumes that sales are not impacted by increasing prices.)

Back to reality: recently, input costs for businesses have generally increased at a faster rate than companies have been able to raise prices. We see this in the growing divergence between the y/y changes in the Producer Price Index (PPI) and the Consumer Price Index (CPI). As shown below, coming out of the short COVID-19 recession, producer prices have soared at a pace that has outpaced consumer price increases. What does this mean for businesses? It depends on many factors, including the composition of cost structure. Looking beyond the present, as supply chain bottlenecks and demand normalize and supplies increase, it is likely that commodity and producer prices will moderate. With most companies continuing to raise prices into the future, the PPI/CPI dynamic may revert—a sign that underlying conditions will likely lead to restored margins and potentially allow for margin expansion.