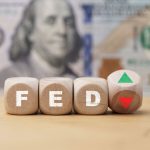 • In yet another record-setting move, the Fed raised rates by 75 basis points (bps) at its October meeting. September marked the first time in history the Fed had hiked rates by 75 bps three consecutive times—now the record is four. We are experiencing the fastest rate cycle in history.

• Wells Fargo reports year-over-year loan originations have dropped by as much as 90 percent this quarter, as higher interest rates stifle demand for loans. In response, the company is reportedly preparing for large layoffs, an indication that widespread layoffs will extend beyond the tech industry.

• Target and other major retailers are experiencing sharp increases in theft this year, resulting in hundreds of millions of dollars of lost revenue. (Target alone reported a loss of roughly $400M due to in-store theft.) In response to this troubling trend, the state of California announced a series of measures to combat retail crime ahead of the holiday season.

• On 11/10/22, we witnessed the fourteenth-largest single day rally for the Nasdaq. Vicious one-day rallies are fairly normal during bear markets; of the twenty largest one-day Nasdaq rallies (prior to 11/10/2022), sixteen occurred during bear markets.

• When the stock market falls, the allure of quick gains dissipates and the number of people opening brokerage accounts drops. The chart below, which incorporates brokerage account data from Interactive Brokers and Schwab, illustrates this trend. 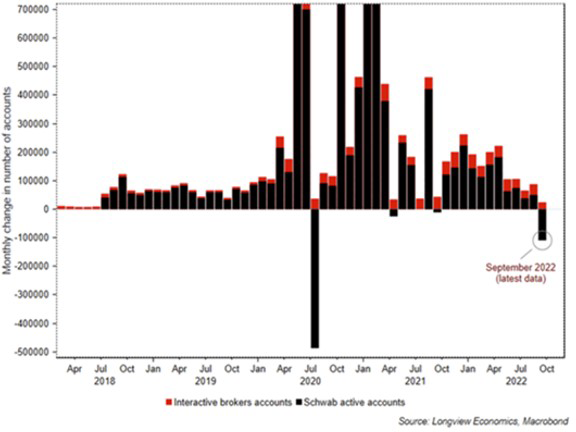 • Canadian National Railway (CNI) – October marked the single best month on record for grain movement on the CNI network. The railroad moved 3.23 million metric tons of grain from Western Canada, a massive amount that exceeds the company’s previous record by over 50,000 metric tons.

• Visa (V) – Visa recently announced that longtime president Ryan McInerney will become the company’s next CEO, replacing Al Kelly who will assume the role of Executive Chairman. It is the first time since going public in 2008 that the company has appointed an internal successor to CEO. Visa’s strong bench of talented leaders has helped the company perform well despite the difficult macroeconomic backdrop and should facilitate a smooth leadership transition early next year.

We have dedicated several of our monthly missives to discussing tightening financial conditions and their effects on the economy. This month, we want to focus on how this year’s dramatic tightening is especially challenging for pension funds.

Pension plans are highly sensitive to interest rates because they seek to balance assets and liabilities over long periods of time. The plans determine investment strategy by calculating the present value of future obligations, and low discount rates—such as those we have experienced for the last fourteen years—increase the present value of pensions’ long-term liabilities. As liabilities grow, actuarial calculations may reveal pension deficits (i.e., plan assets are not sufficient to fund future obligations).

Following the 2008 financial crisis, low interest rates made it difficult for pension plans to close the gap between assets and liabilities. As a result, pensions adopted a new investment strategy: liability-driven investing (LDI). The strategy allows pensions to use derivatives and hedging techniques to meet future liabilities. As collateral to support these riskier strategies, pensions largely use government debt.

The vulnerability of LDI investment strategies was exposed in September through the near collapse of many UK pension funds. Due to (short-lived) Truss government initiatives, UK government debt (gilts) plummeted in value and sparked margin calls for many UK pension plans, which held gilts as collateral and used derivatives to hedge risk. To avert a crisis, the Bank of England reversed its strategy of quantitative tightening and purchased gilts in order to prop up the price and stabilize the environment.

While a UK pension crisis was avoided in September, rapidly tightening financial conditions have laid bare the risks of investment strategies that assume rates will remain low indefinitely. And UK pensions are certainly not alone in pursuing riskier investments: the Ontario Teachers’ Pension Plan was an investor in cryptocurrency exchange FTX, and while its $95M investment represented just 0.05 percent of plan assets, it was forced to write it off entirely. The global financial system simply cannot incentivize risk for so long without significant casualties.