• At the most recent FOMC (Federal Open Market Committee) meeting, Fed Chairman Powell announced that interest rates will likely remain at their current levels (essentially zero) until at least the end of 2023, with a target inflation rate of 2%.

• New Jersey lawmakers recently agreed to increase taxes on earnings over $1 million from 8.97 percent to 10.75 percent, a response to the state’s pandemic-related struggles. Interestingly, neighboring New York has been reluctant to increase taxes for fear high earners relocating across state lines.

• 25% of UK households have performed DIY dentistry during the Lockdown according to the Association of Dental Groups (ADG).

• While cold chain storage and transportation is customary for the pharma supply chain, several SARS-CoV-2 vaccines require frozen storage (negative 94 degrees Fahrenheit), which means only hospitals and sophisticated medical settings will be equipped to administer them.

• COVID-19 prompted Tyler Technologies to launch its remote court solution, Tyler Virtual Court, earlier than anticipated. Thanks to months of intense labor, Tyler Virtual Court—currently in use by more than sixty municipal courts—allows for secure, virtual, face-to-face court proceedings. The platform integrates with case management software to streamline the legal process for both courts and defendants.

• Walmart (WMT) and Microsoft (MSFT) teamed up in a failed bid to buy video-sharing social media app TikTok. Oracle, however, appears to have won the bidding contest with a plan (not yet approved by the US) that includes Walmart as their strategic partner. There is significant conflict and confusion surrounding the new entity’s ownership structure, and what elements, exactly, Oracle and Walmart will—and won’t—own.

The More Things Change, the More They Stay the Same

When we discuss our investment philosophy, you will hear us declare that we are thematic, bottom-up stock pickers. We find long-term, cyclical themes taking place across contexts—for example, in our society or our economy—and invest in companies we feel are best positioned to take advantage of those themes over many years. Our goal is to hold the companies we invest in for a very long time—as close to forever as possible. (In the investment world, “forever” counts as seven years or more; the average holding period of a stock for non-LBA clients is just nine months.) Annual turnover is a ratio that measures how much a portfolio’s holdings have changed over the course of a year due to buying and selling activity. The ratio is calculated by dividing the aggregate inflow or outflow dollar value by the beginning dollar value of the portfolio. At the end of 2019, our average annual turnover measured 11 percent, significantly lower than the mutual fund industry’s average of 60 percent. We avoid short holding periods for two reasons: they create tax issues, and they prevent us from taking advantage of long-term secular trends.

Below are two charts that illustrate just how little changes in financial markets over time:

1) This chart tracks market composition, by sector, for more than a century. 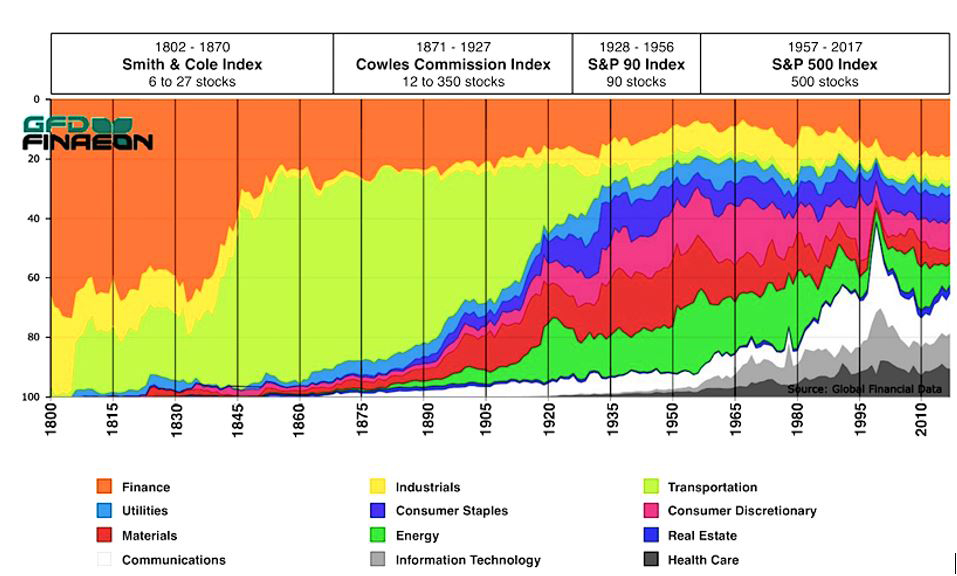 2) This chart shows the top ten US stocks, as measured by market cap, beginning in 1930.

What can we glean from these charts? Long-term secular trends—as opposed to shiny, new, must-have stocks (does anyone remember the nanotechnology craze?)—are how investors make money. These historical views highlight the industrial and social disruptions of the nineteenth and twentieth centuries. In the early 1800s, the financial sector almost exclusively made up the investable market. By 1850, however, transportation (thanks to the new technology of rails) was the economy’s largest contributor. Similarly, in the early 1900s materials boasted one of the largest sector weightings but was replaced by consumer discretionary as disposable incomes rose over the decades. The last century’s top ten holdings by market cap are easily recognizable. These companies—including AT&T, General Motors, and Exxon—outperformed and remained the largest companies in the US for decades until complacency, arrogance, or a combination of both led to their respective downfalls. We believe the best way to create and sustain wealth is to identify long-term trends and well-positioned companies. To combat volatility and doubt (both inevitable), just remember why you own something and investigate whether fundamental changes to the sector or company have transpired.