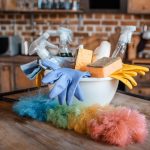 • The Hubble Telescope recently captured light bending, a result of gravitational lensing as the mass of galaxy Abell 2813 distorted light from further galaxies. In addition to providing an awesome photograph, the snapshot illustrates Einstein’s theory of general relativity.

• While the Johnson & Johnson (J&J) and AstraZeneca vaccines have primarily garnered headlines for blood clot risks, analysis of 795 adverse vaccine events in the US (as reported to the CDC through April 8) links just 7 percent to J&J’s vaccine. The study attributes 400 adverse events (50 percent) to the Pfizer vaccine, 337 (42 percent) to the Moderna vaccine, and 58 to J&J.

• Lumber prices advanced on each trading day between March 26 and April 19. This impressive streak illustrates two prevailing macroeconomic trends in the US: skyrocketing housing prices and pandemic-related supply constraints.

• Time for spring-cleaning! According to a recent Harris Poll survey, a whopping “66 percent of Gen Z (ages 18-24), 62 percent of Millennials (ages 25-40), 63 percent of Gen X (ages 41-56), and 73 percent of Boomers (ages 57-75) do not consider dusting to be a priority.” Dusting improves indoor air quality, and since up to 90 percent of our time is spent indoors (a statistic that has probably only risen during the pandemic) this irksome chore is, unfortunately, critical to our health. Read more from the American Lung Association.

• In a study commissioned by the RVIA (RV Industry Association), RV wholesale shipments are projected to reach roughly 535,000 in 2021—a record high. The figure represents a 23 percent increase over 2020 wholesale shipments and is 5 percent above the record high set in 2017. According to the same study, a record 11.2 million American households now own RVs.

• In 2020, US manufacturers produced 3.4 percent more cardboard than they did in 2019. The increase was pandemic driven; as more consumers shifted to e-commerce, the demand for shipping boxes rose. The increase (to put it into perspective) is equivalent to 477 square miles of corrugated board.

• AMZN – American Tower isn’t the only LBA-owned company that stands to benefit from the rollout of 5G. DISH, which is currently building a nationwide 5G network to assuage antitrust concerns, formed a “strategic collaboration” with Amazon Web Services (AWS) to create and launch the first standalone, cloud-based, Open Radio Access Network (O-RAN).

• PEP – PepsiCo recently announced plans to expand regenerative agriculture programs across seven million acres of farmland, an amount equivalent to the company’s entire agricultural footprint. In addition to helping improve the livelihoods of workers along Pepsi’s supply chain, the plan aims to remove at least three million tons of greenhouse gas emissions and allow the company to sustainably source all its key ingredients.

• AMT – The shift to 5G is happening. A recent poll conducted by Cowen showed that over 40 percent of respondents intend to acquire a new phone in 2021 (up from the 30 percent who planned to do so in 2020). New phones, which are equipped with 5G capabilities, will spark ever-increasing demand for 5G networks and data storage services. As carriers accelerate their 5G deployment, AMT stands to benefit.

• MSFT – Microsoft announced the acquisition of Nuance Communications for $19.7 billion. Nuance is the pioneer in voice-to-text transcription technology and a dominant provider in the medical industry for health records management and clinical reporting software.

• AMZN – Per Amazon’s annual letter, the Amazon Prime program has officially reached over 200 million members globally. (For context, not even the largest US cell phone carriers have that many subscribers.)

Time is the Edge

When we look at large-cap and mega-cap companies (e.g., JNJ, MSFT, AMZN) we are often asked to explain our “edge.” What is unique about the way we consider and analyze very large enterprises? While our large-cap investing edge—patience—may seem simple, it is buttressed by a carefully thought out, complex, analytical process that helps us identify worthwhile investments for the long term.

As long-term investors, time is a factor we can exploit. When a high-quality company boasts strong barriers to entry, low balance sheet debt, free cash flow, and great management, it is set to prosper over the long term. Wall Street focuses on quarterly earnings, but our (and therefore your) strategy directs us to ignore short-term noise. Instead, we focus on a company’s progress against its long-term objectives.

Our philosophy, for example, led us to Alphabet (GOOGL), a company we have now owned and followed for several years. GOOGL’s balance sheet is pristine, its search function is considered a necessity by most, and its advertising network is the largest in the world. We recognize GOOGL’s straightforward, long-term strengths will, on their own, result in quiet, steadily compounding growth. Some investors, though, are so focused on quarter-to-quarter earnings that they will altogether dismiss this high-quality company.

Alphabet has over $130 billion in cash and trades for 21x 2022 earnings (excluding cash); it continues to dominate and grow in many markets. There are several lower-quality companies that trade for higher valuations. Yet GOOGL, as the world leader in digital advertising, will only become more powerful as that industry continues to expand over the long term.

GOOGL is always innovating; its portfolio of technologies under development currently includes cloud services, autonomous vehicles, various life science ventures, and other money-losing endeavors. Although these “long shots” may be draining resources today, just one success could result in a multibillion-dollar winner for GOOGL. The company’s new CEO (as of 2020) is the most shareholder-friendly CEO GOOGL has ever had (sure, it has only had two, but still…), which may allay concerns that the company is spending frivolously. It is worth noting that GOOGL spent $10 billion and $30 billion on share buybacks in 2018 and 2020, respectively.

The catalysts behind GOOGL’s continued excellence are (1) a new CEO, (2) a trend to be more shareholder friendly, (3) a monopoly position with secular tailwinds for massive growth, and (4) a fortress-like balance sheet and unmatched free cash flow. Time is the edge—it is just what a high-quality company needs to grow, thrive, and dominate.