• Mariah Carey’s “All I Want For Christmas Is You” is once again the top Christmas song on Spotify; it was first released in 1994 and only reached #1 in the US in 2019. It is just one of two holiday songs in the Spotify “Billions Club” (songs with over one billion streams)—the second is Wham’s “Last Christmas.”

• Boeing recently marked the end of a 50-year production era when it rolled the last 747 from its factory floor.

• According to data from a recent Pew Research study, 41 percent of Americans don’t use cash for any type of purchase in a typical week. This statistic reflects a recent and sharp increase in non-cash payment adoption: just 29 percent and 24 percent reported never using cash in 2018 and 2015, respectively.

• A survey conducted by Morgan Stanley found that almost half of Americans between the ages of 18 and 29 live at home with one or both parents; within this group, 55 percent moved home within the past year. The top-cited reasons for moving home were (1) to save money and (2) an inability to afford rent. The last time such a large portion of the 18–29 cohort lived at home was in 1940, when roughly 47 percent lived there as a result of the Great Depression.

• ChatGPT has taken the world by storm and renewed focus on the future of artificial intelligence (AI). OpenAI, an AI research laboratory, released Chat GPT, a prototype of an AI chatbot (a large language model powered by AI). ChatGPT instantly went viral and gained over one million users in just five days.  Many LBA-owned companies, including Amazon, Alphabet, Apple, Microsoft, and NVIDIA, have growing AI businesses and years of experience using AI to improve operations and customer service.

• Johnson & Johnson (JNJ) – It is the end of a J&J era. New-ish CEO Joaquin Duato was named Chairman of the Board, taking the reins from longstanding former CEO and Chairman, Alex Gorsky, who successfully led J&J for roughly a decade. Mr. Duato is only the eighth person to serve as both Chairman and CEO, a tremendous vote of confidence by the company’s Board of Directors as he leads the spin-off of the consumer health business and the revitalization of the MedTech business.

• Visa (V) – Visa plans to invest roughly $1B to boost digital payments and financial services in Africa. Over 40M merchants do not accept digital payments on the continent, a figure which demonstrates how impactful Visa’s investment could be.

• ConocoPhillips (COP) – Higher oil prices have allowed ConocoPhilips to generate tremendous free cash flows this year. In addition to returning cash to shareholders, COP has been deploying capital to natural gas projects globally to position the company for success amid the ongoing energy transition. These investments are already showing promise: COP invested in projects in Qatar, and those joint ventures resulted in a 15-year contract with Germany’s new liquified natural gas (LNG) terminal, part of Germany’s strategy to diversify its energy imports.

The world has been captivated by the 2022 FIFA World Cup since the mid-November opening match in Qatar. The tournament has been memorable, not only because of the highly anticipated matches between powerhouse countries but also due to several considerable upsets, including Morocco—the first African nation to ever reach the semifinals of the World Cup. This month, we will discuss the World Cup’s economic impact on Qatar and analyze why the economics of the next World Cup, to be held in North America in 2026, will differ.

Countries hosting the World Cup have historically benefited from booms in their respective equity markets. An analysis of MSCI country-specific indexes for hosts of the previous seven World Cups (excluding outlier 2014 host country, Brazil) shows that on average, host nations’ markets increased by 21.8 percent in the months leading up to the tournament and by 13.4 percent in the year following the tournament—well exceeding comparable global averages of 4.3 percent and 9.5 percent, respectively, for the same timeframes (as measured by the MSCI World Index). With approximately $4 billion of foreign inflows in the ten months leading up to the tournament, Qatar’s stock market has upheld this trend and outperformed its regional peers.

The QSE Index, which tracks the twenty largest and most-liquid stocks on the Qatar Stock Exchange (QSE), climbed 24.7 percent between January and April 2022, fell almost flat in June, but rose again over the summer and by mid-September was up 12.1 percent year to date. As a result, the QSE Index stands as a relative outperformer among most major regional and global markets for the first eight months of this year (the latest data available). 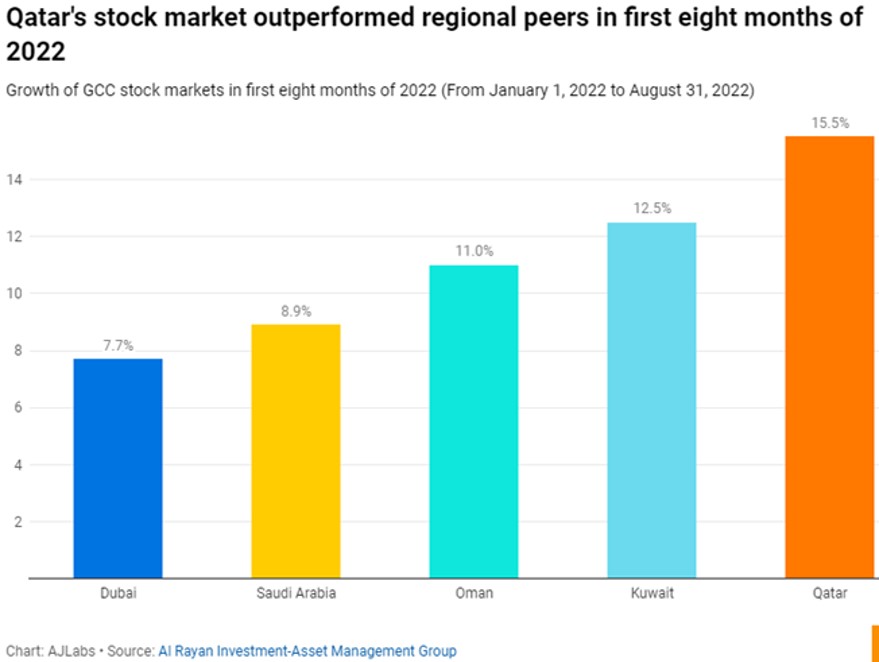 Like former host countries, Qatar’s economy benefited in the months leading up to the tournament, but what happens next will likely differ. Qatar spent a staggering $220 billion (at least) in preparation for the tournament, more than eleven times the previous spending record of $19 billion by Brazil in 2014. Since 2010, Qatar has spent an average of $18.3 billion annually (or more than 10 percent of its GDP) on World Cup efforts; improvements to improve the country’s infrastructure account for most of the spending. Qatar expanded the Doha Metro, its regional highway system, the airport, and even built a new city, Lusail, which is now the second-largest city in the country.

Due to Qatar’s aggressive and aberrant spending, predicting the post-tournament economic environment will be difficult. That said, analysts estimate that Qatar’s 2022 GDP will be 4.1 percent higher than last year’s. The World Cup alone will contribute approximately $17 billion to Qatar’s economy this year.

Determining whether Qatar’s extraordinary investment paid off will take years and will be measured by Qatar’s ability, over the long term, to attract foreign investment, support tourism, grow its population, and lower unemployment. Without these advances, Qatar’s infrastructure spending spree will have a negative impact on Qatar’s economy.

There is likely far less risk for the 2026 World Cup host countries, Canada, Mexico, and the US. Their united bid relies on the utilization of existing North American infrastructure and therefore significantly reduces the costs associated with hosting the event. Per a report from Boston Consulting Group, each North American host city can expect a $160–$620 million boost in economic activity and a net benefit of $90–$480 million.