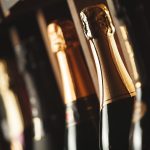 • If you usually celebrate the new year with champagne, it’s likely that your wallet feels a bit lighter this year. But if you invest in fine wines, you have much to celebrate. Vintage champagne prices surged 33.7 percent in 2021 due to reasons we are all too familiar with by now: increased demand, diminished grape harvest, and a disrupted supply chain.

• In a recent Gallup poll, the average American read 12.6 books over the past year. That figure includes print, electronic, and audio books and is the lowest number recorded since 1990, when Gallup first started collecting data on book reading. While the number of adult readers in the US has remained steady, their reading habits have changed: they are reading two to three fewer books per year than they did in 2001–2016.

• Gap Inc. is joining the non-fungible tokens (NFT) craze by selling NFTs of its hoodies. In 2021, the NFT market as a whole generated over $23B in trading volume.

• One gauge for inflation is the breakeven rate, which shows the spread between the nominal yield of a fixed-rate bond and the yield of an inflation-linked bond of the same maturity. Typically, Treasury Inflation Protected Securities (TIPS) represent the inflation-linked bond in breakeven calculations. But the Fed’s pandemic TIPS purchases have distorted the market; it has bought more TIPS than have been issued and now owns almost 25 percent of them. As a result, breakeven rates may not be reliable benchmarks for inflationary pressures.

• Union Pacific (UNP) – Union Pacific is decreasing the peak season surcharges it imposed on non-core clients last year in response to the ongoing supply chain crisis. Though the number of ships waiting off the West Coast continues to climb, UNP’s surcharge reduction could point to supply chain improvement.

• Alcon (ALC) – Alcon launched DAILIES TOTAL1® contact lenses, for patients with astigmatisms, in the US; the product has been well received by customers. About 32 percent of contact lens wearers have an astigmatism, but just 10 percent wear lenses specifically designed to slow or stop the condition’s effects.

• Apple (AAPL) – Competition is heated for top talent in Silicon Valley. To retain valued employees, Apple is reportedly offering them between $50,000 and $180,000 via restricted stock units (RSUs) with multi-year vesting periods. A report from Bloomberg suggests that Meta (Facebook) has poached over 100 engineers from Apple and other competitors.

• Alphabet (GOOGL) – Google’s cloud services business has grown by 20 percent year-over-year. The company now controls 6 percent of the cloud market and is gaining ground on competitors, including Amazon Web Services and Azure.

Wondering why gas prices are so high?

You guessed it—supply and demand, yet again. Though the issue predates the pandemic, as we discuss below, the recent and drastic fluctuations in demand for energy have exacerbated the situation.

Background
The energy industry is characterized by booms and busts. Prices typically rise during periods of economic strength (i.e., when exploration and production companies ramp up production) and fall when the economy falters and the energy supply exceeds demand. The price of oil is driven by a number of factors including the health of the global economy; the Organization of the Petroleum Exporting Countries’ (OPEC) policy; changes in energy production or inventory levels; and geopolitical turmoil, which can threaten or prevent access to global fuel sources.

The Impact of Fracking
In the mid aughts, rising US energy consumption and diminishing domestic energy supply caused the price of oil to rise; it reached nearly $150 per barrel in 2008 (the average price of oil in the 1990s was around $25). However, the advancement of hydraulic fracturing (aka fracking) technology upended the US energy landscape. Quite suddenly, thanks to fracking, oil and gas companies could access previously unreachable—and vast—oil and gas reserves. Fracking technology was so revolutionary that by 2020, the US was a net annual petroleum exporter for the first time since 1949.

Today’s supply and demand imbalance is linked to the fracking boom, which generated excess energy supply and elevated US inventories. In 2015, when US inventories were high, demand for energy began to fall as the economies of China, Europe, and many developing countries slowed. With immense reserves and oil prices in decline, oil and gas companies sharply decelerated explorations efforts. (See Exhibit 1) 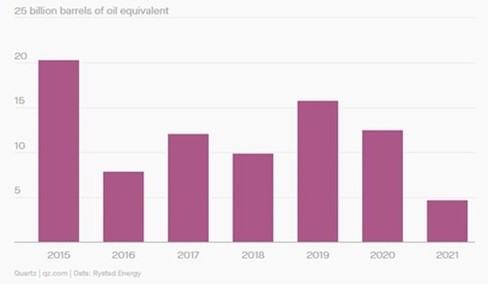 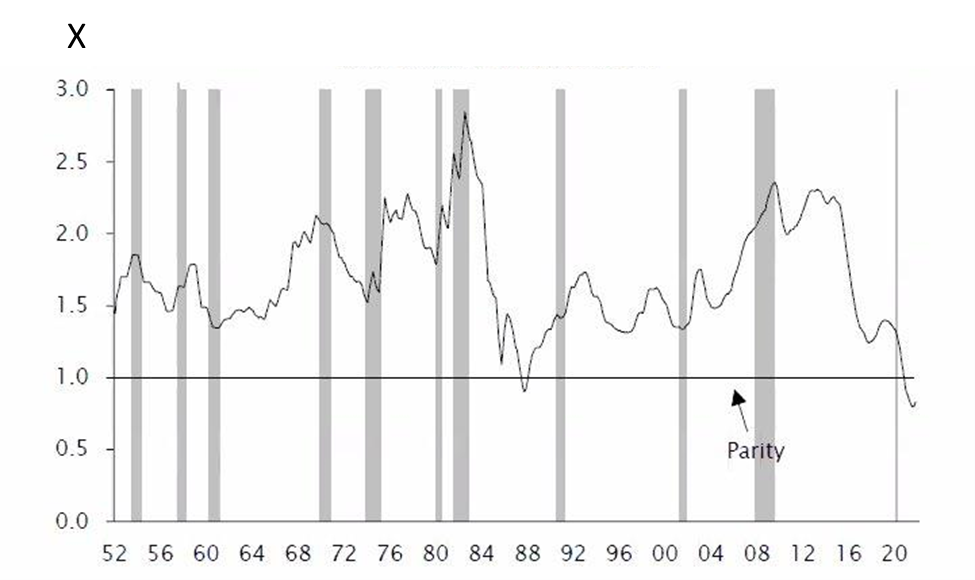 The Impact of the Pandemic
It was into this stalled environment that the pandemic arrived in 2020. Demand for energy completely evaporated as lockdowns took place worldwide. Oil prices fell to nearly negative $40 per barrel in April of 2020 (i.e., holders of oil were willing to pay someone $40 per barrel to assume ownership of it).

No one expected global demand to revive so quickly and by so much. Today, the combination of low inventories, limited capital investment, and raging demand is creating a severe supply/demand imbalance. As a result, the price of a barrel of oil has risen to levels not seen since 2014. If current trends continue, so will this disruption. (See Exhibit 3.)

The numbers in the above chart are not encouraging, but recent indications of more rigs coming back online signal that US production may increase significantly in 2022. In November 2021, there were 560 oil and gas rotary rigs in operation, up from 250 in August 2020—but still significantly below the 1,925 operating in October 2014.

Looking Ahead
Control of energy supply and demand is highly political because the economic ramifications of that control are immense. Countries with domestic reserves of oil and gas have a distinct advantage over those that don’t, which is why energy is such a high-stakes, geopolitical concern. Although most countries are pledging to be carbon neutral by 2050, the reality is that 84 percent of global energy still comes from fossil fuels. Countries with ample energy reserves have power and are willing to flex it, as Russia is demonstrating now through its actions in the Ukraine.

What does this all mean for the price of gas? High prices will certainly encourage producers to come back online but predicting long-term supply, demand, and pricing dynamics will be challenging as the world moves to carbon neutrality. It won’t be easy to maintain energy production levels that support current needs while investing in new technologies to achieve net neutrality goals. As a result, we will probably have to endure supply/demand disruption for some time.