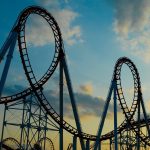 In our spring newsletter, we emphasized the importance of staying invested over the long term by (1) illustrating the outsized impact of the stock market’s best days and (2) explaining how staying invested increases the likelihood of positive returns. While our analysis last spring focused on the broader implications of a long-term strategy, the strategy only works if the security you are holding is a quality company with durable, competitive advantages that drive success in both strong and weak markets.

In 1972, an investment manager named Thomas Phelps wrote a book, 100 to 1 in the Stock Market, which analyzed companies whose stock prices had risen one hundredfold from their starting price (i.e., a $1 investment grew to at least $100). He studied stock price data from 1932 to 1971; within this timeframe, he identified 365 stocks that increased 100x. In 2015, Chris Mayer revisited the 100x concept and published his book 100 Baggers: Stocks That Return 100-to-1 and How To Find Them. Mayer’s book is a great read (we highly recommend it!) and, like Phelps’s book, discusses 365 stocks that increased 100x but within a different time period (1962-2014). “The biggest hurdle to making 100 times your money in a stock,” Mayer writes, “—or even just tripling it—may be the ability to stomach the ups and downs and hold on.” To support this statement—with which we strongly agree—Mayer provides numerous examples of great companies that would have been tempting to sell at various points in time. Apple, an LBA holding, is a great example, “from its IPO in 1980 through 2012 [it] was a 225-bagger.” Its 32-year trajectory, however, wasn’t always smooth: investors had to stomach two peak-to-trough losses of at least 80 percent and countless other double-digit drawdowns. Since 2012, Apple has continued to compound tremendously (it’s up roughly sevenfold from 2012). In 1980, not many investors would have imagined Apple would eventually become the $2.45 trillion behemoth it is today.

PepsiCo is another example of a 100+ bagger. The company’s tremendous track record is also notable because it spans decades—it was featured in both Phelps’s and Mayer’s books, published 43 years apart. Unlike faster growing companies like Apple, Biogen, or Dell, Pepsi’s growth has been more measured, steadily compounding over time. As Mr. Mayer details, “it took the New York-based soft drinks and snack giant 28.5 years to hit 100-bagger status from 1962,” slightly longer than the 26-year average for companies included in his study.

As shown in Figure 1, the rate of compounding dramatically impacts the time required to generate a 100x return. Even with a tremendous, 50-percent rate of growth, it would take over a decade to produce a 100x result. This point is vitally important—even with tremendous rates of growth, creating wealth takes time.

Figure 1: Years to 100x at Varying Rates of Growth 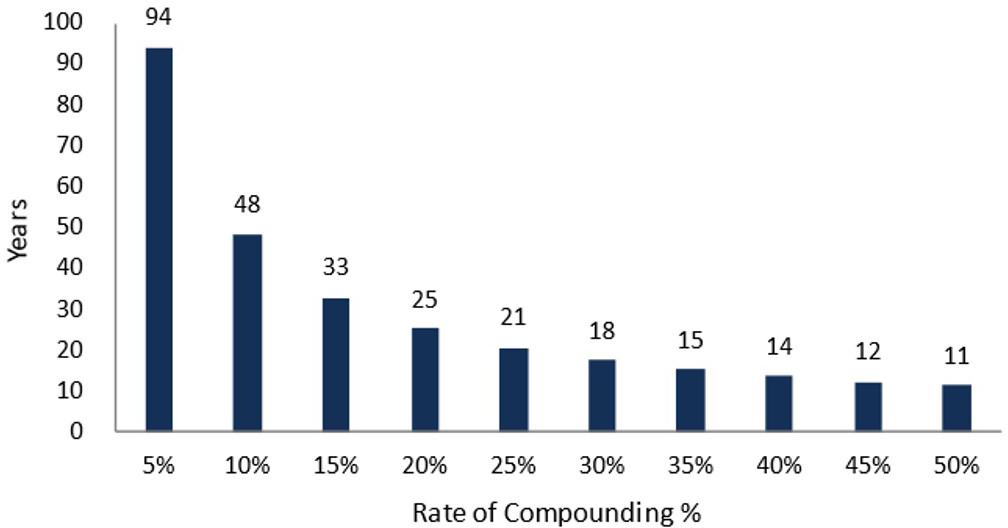 Source: Adapted from Chris Mayer’s 100 Baggers: Stocks That Return 100-to-1 and How to Find Them

Pepsi’s compounding journey started in the 1930s, after the company filed bankruptcy for the second time within ten years. Its compound growth rate dramatically accelerated in the 1980s when the company expanded internationally. This geographic expansion was reinforced by product line expansions: Pepsi created new markets (e.g., fruit sodas), acquired well-known international brands, and expanded into fast food. More recently, the company’s expansion efforts have centered on acquisitions and organic product development; notable company/brand acquisitions include SodaStream, Muscle Milk, and Rockstar Energy Drinks, and Pepsi’s new product development team launched Gatorade Zero, Bubbly Sparkling Water, and (most recently) Nitro Pepsi, a nitrogen-infused cola. With a tremendous track record of value creation and consistently high profit margins, it’s likely that Pepsi will continue to create value for shareholders. This value creation probably won’t be linear and, like every 100-bagger, it will take time. Since 1972—and despite several recessions and bear markets—Pepsi has delivered a cumulative total return of 45,601 percent, more than 15 times the S&P 500’s 3,012 percent return for the same time period.